skip to main | skip to sidebar

Heritage in the Auckland City Centre

For the Culture and Heritage Planning course we had an assignment option of identifying and recommending for protection some heritage places.
I think my interest in this topic is how heritage can be defined—potentially, heritage includes everything. So how to decide what to protect?
I have a penchant for modern architecture and grand and exciting buildings. I am always hearing people complain of bad 1980s architecture or how terrible mirror glass is, but these buildings could be the heritage of the future. I was initially worried that my choices of heritage places was a bit out there, but it was well received.
B. J. Ball Building (1959) 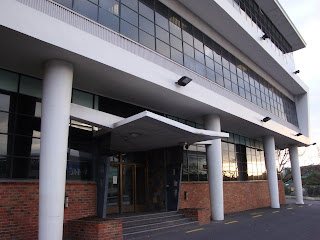 Milan Mrkusich's mural is on the side of the building: 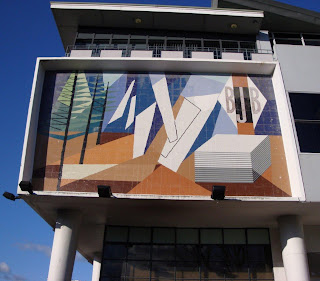 The architectural form the B. J. Ball Building, particularly the white pilotis and long modern style, is significant for its contribution to the important site on the cliff above Fanshawe Street.

On Hobson Street, with facade and the tea rooms on the top floor being designed by R. A. Lippincott, who also designed the Auckland University clock tower building. 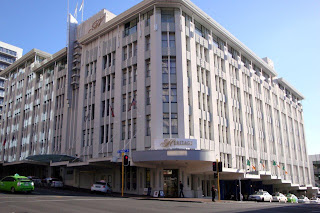 The interior of the tea rooms has aesthetic significance, and is fully intact. The facade actually joins together a number of smaller warehouses into a large and impressive building. This exemplifies Art Deco style, and the way this was used to advance the modern image of the Farmers’ department store reveals part of the store’s history.

This one is my favourite. The mirrored and coloured glass were the latest technology and have created a form that is not defined by any sort of column structure. The architects Warren and Mahoney have a collection of buildings in downtown Auckland from this period. 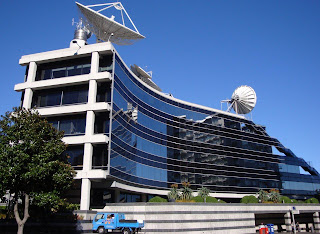 The building has hard surfaces, curved lines and a shiny, reflective look. It has an exterior staircase with landings and an interesting, technology-populated roof. This, and the curved façade and stepped form of the
building make it an elegant example of postmodern architecture in the Auckland city centre.

[All photographs taken by Patrick Clearwater.]
Posted by Patrick at 5:06 PM